Law360 Op-Ed: Impossible Impartiality In The Trump And Weinstein Trials 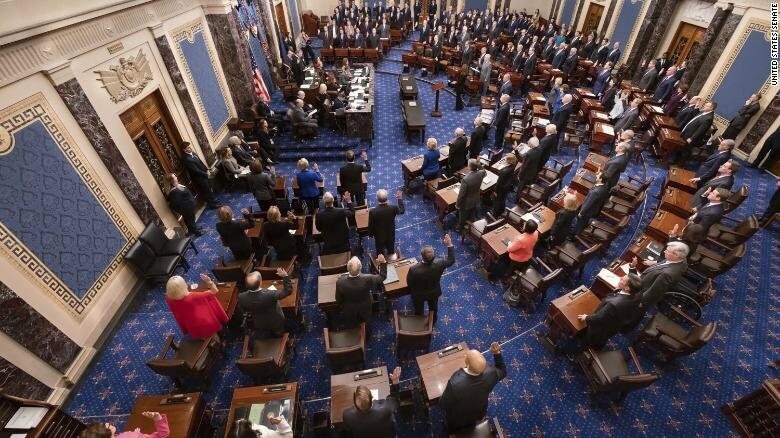 Recently, two sets of juries were empaneled: one to decide the fate of President Donald Trump and the other to decide the fate of Harvey Weinstein. Both sets of juries swore an oath of impartiality at the beginning of their trials. Trump’s senatorial jurors have repeatedly violated their oaths, and Weinstein’s jurors will have significant challenges in upholding theirs.

The oath of impartiality these days has become as laughably empty as clicking the agreement box for the “Terms and Conditions” of a new smart phone. Without addressing the difficult issue of impartiality in the age of political polarization and instant information access, these judicial proceedings will make a mockery of the rule of law, the rule of reason and our justice system as a whole.

Our constitutional framers enshrined impartiality as one of the fundamental principles of our Sixth and Seventh Amendments to ensure that juries did not bring their personal interests or biases to the process of deciding the fate of men and women in our justice system. One of those framers, Thomas Jefferson, greatly admired John Locke, a 17th century philosopher who was thought to be influential in Jefferson’s drafting of the Declaration of Independence.

Locke, along with Francis Bacon, Renee Descartes, Isaac Newton and Thomas Hobbes, was thought to have influenced the 18th century Enlightenment or the Age of Reason, which in turn influenced the development of scientific reasoning, rational thought, evidence, and the modern concept of jurisprudence and legislative procedure. These concepts sought to free us from the personal whims and institutional tyranny of monarchies and the church.

While our founders believed a system of government based on rational thought to be an excellent model for maintaining the needed checks and balances of unrestricted power, the 19th century brought revelations about the human mind that called into question the wholesale adoption of the Age of Reason. Namely, that people are not inherently objective or rational.

The development of behavioral and cognitive psychology has shown conclusively that we are all chock full of biases that impair and impede our ability to be impartial. Daniel Kahneman won the Nobel Memorial Prize for his research and theories on the role of heuristic shortcuts and biases in judgment and decision making. Richard Thaler won a Nobel Prize in economics for his development of behavioral economics, a theory that posits consumers as predictably irrational. Both have written best-selling books on the fallacy of the rational mind in human judgment.

Yet, here we are. Day in and day out, across this country, tens of thousands of judges and jurors are charged with exacting impartial justice, including 100 senators in Washington, D.C., and 12 women and men in New York City.

On Dec. 17, 2019, Senate Majority Leader Mitch McConnell, R-Ky., the ostensible foreperson of the Senate jury, stated clearly, “I’m not an impartial juror. This is a political process. There’s not anything judicial about it.” Yet, a month later, he swore an oath of impartiality.

Judge Kenneth Starr, whose investigation as independent counsel led to President Bill Clinton’s impeachment hearing, told senators that an impeachment proceeding was inherently a process of jurisprudence, despite the fact that most Republican senators have refused to allow witnesses and openly declared that they would move for acquittal without hearing any evidence. Numerous Democratic senators have openly declared that they are convinced of Trump’s guilt, despite their oath to be impartial until the end of the proceeding.

In the Weinstein case, a jury was empaneled that includes a woman who is writing a book on the predatory behavior of older men toward younger women (the judge denied the defense’s motion to excuse her). On the first day of jury selection in New York, Weinstein was charged with sexual assault in Los Angeles and this information was, of course, widely reported. Almost every article that has been written about the Weinstein case cites it as the beginning of #MeToo movement and mentions the fact that dozens of women have accused him of sexual misconduct. There have been flash mob protests in front or the courthouse, his lawyers have been vilified every time they have made any arguments to defend their client, and numerous celebrities have discussed their negative encounters with Weinstein. Approximately a third of the jurors called in that case openly admitted that they could not be fair and impartial, but despite this, New York Supreme Court Justice James Burke has instructed sitting jurors to simply set aside everything they have heard or seen about the case or experienced in their personal lives.

As a trial consultant in more than 1,500 cases, I have spent more than 30 years watching jurors struggle with their role of impartiality, especially during my participation in the trials of O.J. Simpson, Casey Anthony, Aaron Hernandez (second trial) and Phil Spector. In those cases, I assisted the defense teams with the selection of juries, and in designing case presentations to help jurors distinguish the actual evidence from what they had previously seen, heard and read about those cases, as well as some of their fixed opinions that they were instructed to “set aside” by the judge.

Based on reviewing questionnaires and hearing voir dire in those cases, approximately half of the prospective jurors believed it was the defendant’s responsibility to prove their own innocence and expressed a need to see the defendant testify on their own behalf — two things explicitly not required under the law.

This demonstrates how strongly pretrial publicity in high-profile cases and a misunderstanding of the burden of proof affects jury decision-making and impartiality. I also worked with Judge Starr’s office during the Whitewater investigation and one of its subsequent trials of Jim Guy Tucker to better understand how the politics of the independent counsel’s investigation would affect jurors in Little Rock, Arkansas, where the President and Hillary Clinton obviously had deep ties.

Are we really interested in impartial justice? Is there even such a thing in an age when we can become instant smart phone experts on any subject? Why is impartiality even important?

We are not wired for impartiality. Impartiality requires an open mind and is specifically employed with the spirit of inquiry. You have to be willing to acknowledge that you do not know the answer and are willing to wait to find out the answer.

It means recognizing that your initial impressions may be wrong and that a just verdict in a case may go completely against your own beliefs and values. It means recognizing and rising above your own biases and prejudices. It means questioning what you believe to make sure it is based on actual evidence. In high-profile cases, it means knowing that the right verdict may be deeply unpopular.

A commitment to impartiality demands more than an empty oath. While a juror or senator may feel that they can be fair, that does not automatically make them impartial. The courts, the press, lawyers and politicians must acknowledge that prior opinions and experiences cannot be simply set aside — it takes diligence and great effort, and someone who is not willing or able to do that hard work is not able to sit as a juror.

While allegations and conflict sell ads and drive traffic, impartiality also requires that the media be more mindful that the way they frame stories can and does affect juror decision making. For jurors, whether they be senators or citizens, the inability to be impartial is not a personal or moral failing. Their ability to recognize that they may have experiences or beliefs that will affect their ability to be impartial is admirable and crucial to our system of jurisprudence.

An impeachment proceeding is more challenging as it is an inherently political rather than judicial process. The credibility of the entire proceedings has been called into question by political statements from both Democrats and Republicans, yet the senators still invoke the oath of impartiality.

For the public, an impeachment proceeding looks like a trial, with opening statements, witnesses (except in the present case), closing arguments and a verdict. To ensure the integrity of the impeachment process as codified by our founders and to ensure impartiality, it should be conducted more like a judicial proceeding. Violation of an oath should be punishable by contempt. If senatorial jurors have shown they cannot be impartial, they should be excused and should not have a vote.

While we might cynically dismiss these suggestions as impractical, they would help to restore the public’s faith in the independence of our public representatives and that their decisions are based on evidence rather than partisan loyalty.

For these reasons, impartiality is a critical component of our judicial and political process. It is an aspirational value that demands rigor, insight and courage. In our age of instant information, we hate waiting and hate not knowing as our social media constantly invites our comments, conflict and vitriol.

We hate to be wrong and hate to admit that we have any biases. Confirmation bias, where we look for evidence that supports what we already believe, and belief perseverance bias, where we continue to hold beliefs even in the face of evidence proving those beliefs to be untrue, are both cognitive blind spots that pose a serious challenge to our ideal of impartiality. And no one wants to face the disappointment or anger of family, friends, co-workers or constituents as a result of their decisions.

Justice is not popular, convenient or easy. It is and should be a difficult process. As millions of Americans watch the impeachment and Weinstein trials to learn about our justice system and democracy, they should be confident that those rendering verdicts are indeed impartial. Our constitutional framers gave us all, senators and citizens alike, the responsibility to rise above our beliefs, biases and blind spots.

Judges, jurors, the media and the public all need to better understand how news stories, personal experiences, and political interest all can affect impartiality and work to minimize its effect on decision-making. The oath of impartiality is a central tenet of our constitutional commitment to justice and necessary to the rule of law. By cynically dismissing these core principles, we diminish our republic and cheapen our democracy.

If we are going to make our jurors take an oath, whether they be senators or citizens, let’s make them abide by the meaning and true intent of that promise.

Richard Gabriel is president of Decision Analysis Inc., author of “Acquittal: An Insider Reveals the Stories and Strategies Behind Today’s Most Infamous Verdicts,” and co-author of “Jury Selection: Strategy and Science.”

Disclosure: During the Whitewater investigation, Gabriel was hired by independent counsel Ken Starr’s office as a trial consultant.